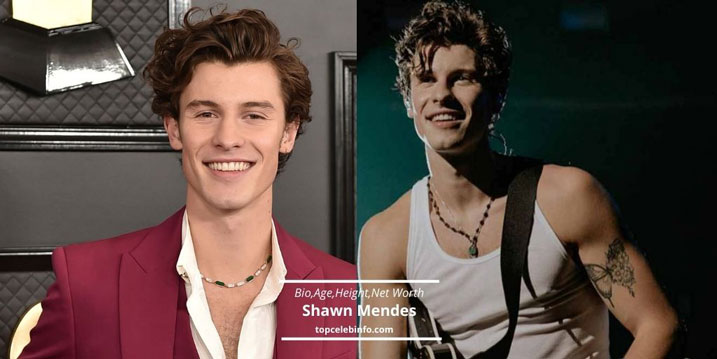 Shawn Mendes is a Canadian singer and songwriter. He attracted followers in 2013 when he started posting covers of songs on the video-sharing app Vine.

Shawn Mendes was born on August 8, 1998, in Toronto, Ontario, the son of Karen, a real estate agent, and Manuel Mendes, a businessman who sells bar and restaurant supplies in Toronto.

His father is Portuguese while his mother is English. He has a younger sister name, Aaliyah Mendes.

Shawn Mendes grew up in Pickering, Ontario, where he attended Pine Ridge High School. He’s learned to play guitar by watching “YouTube tutorial videos” at the age of 13 in 2012.

The following year, he caught the attention of artist directors Andrew Gertler and Island Records A&R Ziggy Charlton, which led him to sign a deal with the record company. Mendes went on to release his music album and debut studio album Handwritten, whose single “Stitches” reached the top ten in the US and Canada, and number one in the UK. Both albums topped the US Billboard 200.

Less than a year later, he started posting cover videos on the social video app Vine in 2013 and gained millions of views and followers within a few months, becoming known for his six-second snippets of many popular songs. He became the youngest to debut in the top 25 in US Billboard Hot 100, placing it at number 24 for the week ending July 12, 2014.